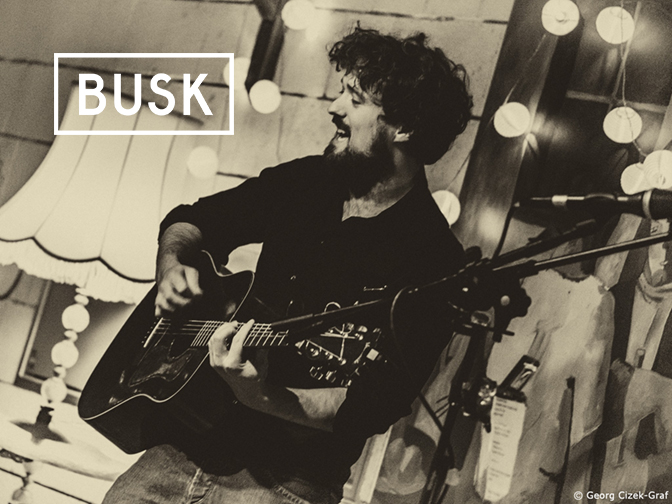 Hometown
Born in Passau (D), currently living in Vienna (AT)

Your first contact with music?
Learning to skate on Beatles-singles and listening to Edith Piaf and Hannes Wader on my mother’s record player.

What do like about playing music on the street?
To me, music is about being “in the moment” (at least I think that’s the most beautiful thing about it) and this is experienced most directly on the street. There are no guarantees: you can have a great day where you put smiles on peoples faces and they might even stop to listen and dance (nothing more uplifting than this), or you might have a bad one where nothing really works and you feel miserable and terrible and are tempted to never pick up a guitar again – often one state can change onto the other within a couple of minutes. Also, I think, it’s probably the purest form of presenting music to an audience: there is no big setup, there is no proper stage, people don’t expect to be moved or touched by music in their everyday movements on the street. You realize you don’t need all kinds of things and stuff to be happy – sometimes a guitar, a couple of chords and a melody is enough.

Which artist or concert impressed you particularly and why?
Black Rebel Motorcycle Club 2005 on their HOWL-tour because they wouldn’t stop playing and were simply perfect. Glen Hansard a couple of years back, because he can do almost ANYTHING on stage (for the encore he played completely unplugged in front of ca. 700 people and you could hear every chord and line). Bob Dylan every time I got to see him, because he’s always changing and always amazing.

The soundtrack of your current life?
Black Rebel Motorcycle Club, Giora Feidman, Passive Elephants (and it has to be said, quite a lot of Speaking Silences as well, as I’m currently working on a new release and to me that means listening to the recordings quite a lot).

What does it mean to be a musician?
It means (among many, many other things) that you have at least a rough idea of what to do with your life, because you’ve given part of yourself over to music. Also, you’re accepting that money is sometimes very short but it’s still worth it (although sometimes just barely), because you can attempt to do the things you feel you were born for.

What does your family think of your choice to be a musician?
They’re ignorantly supportive.

Dream concert – impossible concert: who would you like to hear?
Hmmm… I would’ve loved to see the Beatles live (not in a reunion kind of thing, but back in the days). Also Muse on the Origin of Symmetry tour!

Best or worse experience of your musical career?
Not sure about best or worse, but I had an interesting experience involving Austrian police once: I was busking (legally, I should point out) in the Inner City of Vienna and a woman working in an office opposite shouted at me through the window complaining that I was too loud – I didn’t use any amplification, mind you – and that she had to work. I told her I was working too and carried on playing. About twenty minutes later she came down, interrupted me in the middle of a song and said that if I didn’t stop playing she’d call the police. Since I knew I was allowed to busk at this place (short digression: the Vienna permit system assigns specific dates, times and spots) I told her to go ahead and kept playing. My time slot ran from 4 to 6pm and about five minutes before six I saw a police car come round the bend of the road. Two police officers got out of the car, checked my licenze while I kept playing, waited very politely until I had finished the song (singing while standing directly next to two police officers is a very strange experience, by the way) and then asked me how long I was going to play. I told them I was finished since it was six, to which they nodded solemnly and then asked if I’d seen any noisy people or something. I told them no, but also mentioned the complaints from the woman. It turned out that somebody had indeed called the police, though apparently from another building, complaining about noisy homeless people (“lärmende Obdachlose”) – one of the police officers gave me the once-over and said “Well, you don’t look like a homeless”. The funny thing was, that I had to leave my flat within the next week, and still hadn’t found any new place – I’d never been so close to being homeless before – but I just shook my head and said: “not yet, no.” I asked them about the status of people complaining and they assured me that as long as I stuck to the regulations of the permit I was fine even if people complained, repeating my argument from earlier, that this was basically work, too. Then one of them looked up at the window then back to me and said: “Damn, now she will think you stopped playing because of us. I’m sorry!” Although they weren’t sorry enough to allow me to play another song past six, I still found it a very unique and uplifting experience, especially as I’ve heard some very different stories about busking and the Viennese police.