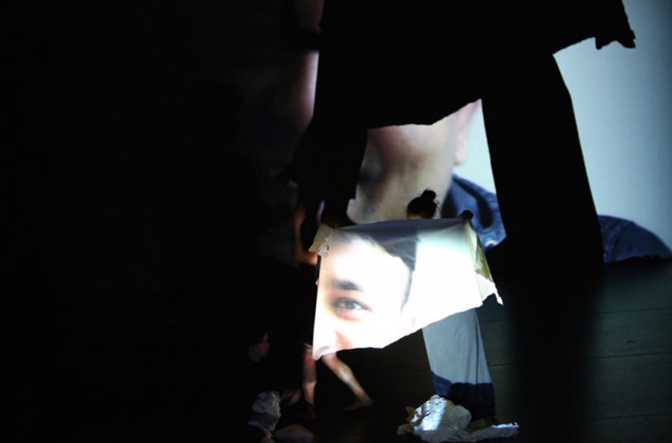 He was born and raised in Iraq in times of war. Later he moved to Belgium where he is currently working as a theatre maker and actor.
At the moment you can find Mokhallad Rasem in South Tyrol where he is talking about his work (19.9.2016) and showing his plays “Waiting” + “Body revolution” (23.9.2016) at the TransArt Festival 16. His mission: showing us the beauty of the human body, introducing us to his world full of changes, hopes and dreams influenced by the shadows of war and making us think about what ‘waiting’ really means.

franzmagazine: Mr. Rasem, when did you decide that you wanted to become a theatre maker and actor?

Ever since I was a child I had a deep connection with my father. He was a very famous actor in Iraq. From a very young age I would go with him to his theatre and watch the performances from backstage. The choice to study theatre was very obvious to me. When I was 15 I started studying theatre at the conservatory and I continued this study at the University of Bagdad. 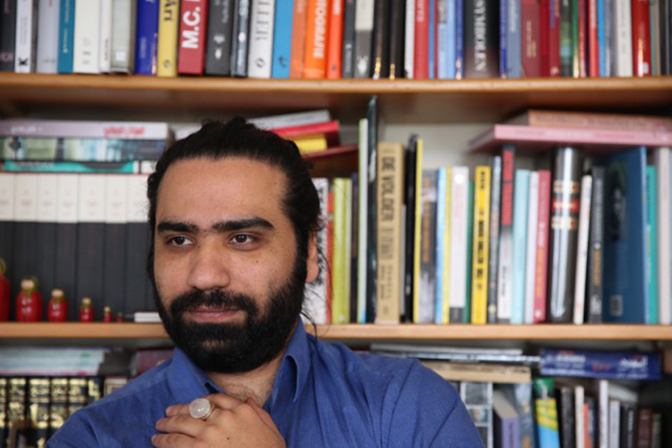 You were born and raised in Iraq. Eight years ago you moved to Belgium. What do you think are the main differences between these countries in relation to your job as a theatre maker and artist?

There are numerous differences. In Iraq under the dictatorship we had to deal with censorship. Artists weren’t allowed to express themselves freely. In Belgium I have experienced true freedom of expression. Also, the circumstances are very different. In Iraq we often had to rehearse in spaces with no electricity, there was no stability for artists. There is no structure, no planning. This is due to a lack of interest from the government for the arts during Saddam’s regime, and then after the war, you can only imagine the circumstances… It is hard to find out who you are as an artist, you are not allowed to have an opinion. In Belgium everything is very structured, with clear arrangements and agreements, and a lot of planning.

In your opinion, how hard is it for a foreigner to start a career as an artist in the western world?

It is really not easy to find your way into the professional field here as a foreign artist. It is important to do a lot of research and to adapt your artistic language to this new place where you want to settle. For me this was the key. Not stubbornly holding on to the codes and traditions of where I grew up but rather transforming these elements to develop my own unique language that communicates with a larger audience.  Along with thinking about how the others perceive you. When you arrive in a new country as a refugee like I was nobody knows you are an artist and nobody will look at you in that way. So you really have to prove yourself artistically and know very well what you stand for. A lot has to do with understanding the different cultures, and with observing the other. You have to go and see a lot of work of local artists of course. It is a competition between being present and absent. It is not about copying or trying to blend in, it is about constructing a bridge between the different cultures and being able to stand side by side.

And would you say that coming from a Middle Eastern country enriches your artistic production from different angles?

Having grown up in the Middle-East, my rhythm, my feelings, my senses are different. That influences my work. I take this background and transform it. I take elements like the destruction, the danger, the chaos, the war, and I want to transform them into beauty. In that way I try to create a new world. My artistic language is where the eastern and the western world come together. In my work you will always detect some kind of broken world, and this broken world is because of the political situation in the Middle-East. Through art we can fix this world. 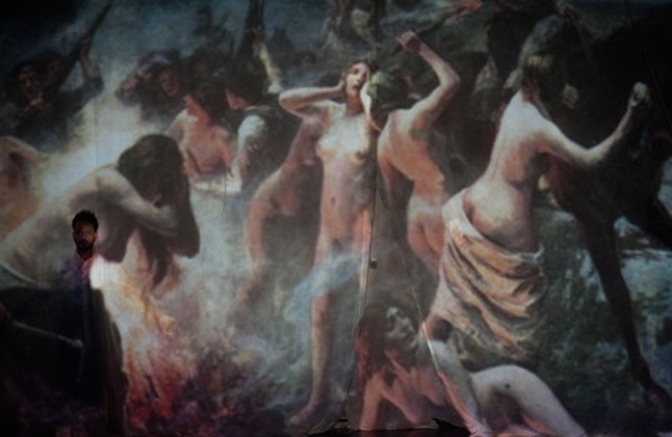 Apart from that: are there also any other ‘theatre maker-problems’, for example with actors or partners?

I have worked with many actors, from all different kind of backgrounds and nationalities, and I realized that art gives you that space to discuss and communicate with each other, exchange perspectives, ideas, opinions. It is all about the message that you want to share with your audience together, and in that you will always find each other. It is not about yourself, your own background, but how you can come together as a collective. You come together in a space to go through a process. And of course, sometimes there will be a clash, but this clash can also be valuable or interesting to present on the stage, it can become part of the performance. To work with people from different backgrounds is essential for me. The theatre is a space where we can just be ourselves together as human beings. That is why art is the ideal facilitator to really come together.

A lot of theatre makers mention books, films or other artists as sources of inspiration for their work. Do you also have some?

When I was a student in Baghdad, the surrealist Salvador Dali inspired me a lot. I noticed that I was living my life in very surreal surroundings, a world between reality and imagination. The line between life and death, visible and invisible was very thin. Nothing was really what it seemed like at first sight. I connected a lot with his work in that way. In general, visual artists inspire me most. Michelangelo and the way he concentrated on the bodily figures for example. Cinema, through the course of the years my work has gained a lot of cinematographic aspects. Or music, Sufi music talks to my soul. Also children’s drawings never stop to inspire me. 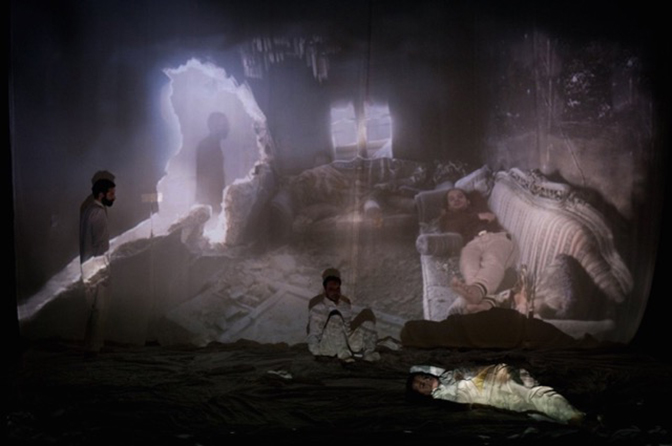 You were born in times of war. Does this also affect somehow your work?

My inspiration is war. It has really inspired me in different ways: the colours, the rhythm, the tension, the loss, the fear, the violence. Reality brings a lot of inspiration to me. You will not see the actual war in my work, but it is always present. What you see is a result of war, it is how it has influenced me as a person. The feeling of war is always somewhere there, hidden.

Your play ‘Body revolution’ is also about feelings…

Body Revolution is about violence, and what violence does to a person. How violence develops into fear. Fear stays in the body. The body is not only flesh and blood. In this performance, the body screams without a voice and speaks without words because when suffering from violence the body gets divided. The three performers represent the different aspects of one and the same divided body.

Except that: what are the main-topics of your work and art?

I always look for universal themes in my work that connect to each other. Love, violence, power, fear, humanity etc.

Your play waiting is literally about waiting. When was the last time you really had to wait for or on something?

I created this performance because when I came to Belgium, I had to wait 5 years before receiving my papers. It is a period of my life that I will never forget. But I didn’t take the waiting in a negative way. On the contrary: it influenced me positive. During this waiting I was able to discover a lot of things. It was like a test of patience, how much patience can a person have? After some time I looked back at this period and I wanted to address this issue, what does this kind of waiting mean to different kind of people? So together with the performers we did research: interviewing a lot of people and asking them what waiting means to them. The most important thing I have been waiting for, and still am waiting for, is being able to visit my father’s grave in Damascus Syria. After the war my family fled to Syria, and my father passed away there while I was in Belgium waiting for my papers. I couldn’t visit my family during that time because I didn’t have papers. When the conflict in Syria started my family left, but my father’s final resting place remains there. I am waiting for this war to finish so that I can go visit him and have a conversation with his soul. In conclusion: I am waiting for peace in this world. 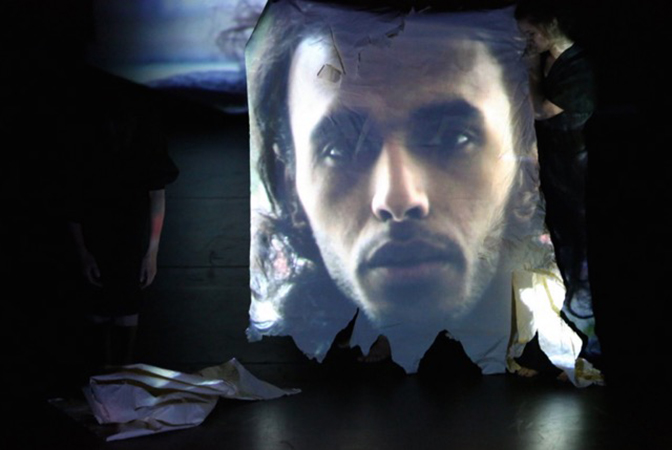 And last but not least: Where do you see yourself in ten years?

I dream of running a laboratory where artists from all over the world come together to make the world a better place. What I know is that for at least another 5 years I will be creating work for Toneelhuis in Antwerp. Growing up in Iraq, I was thought to think only about today. In Europe I learned to think about future plans. But for me, I would love not to think about today, and neither think about far future plans, but just be occupied with what I am creating.

hello Johanna Ralser, be our host